The Savoir-Faire in the Parisian Palace 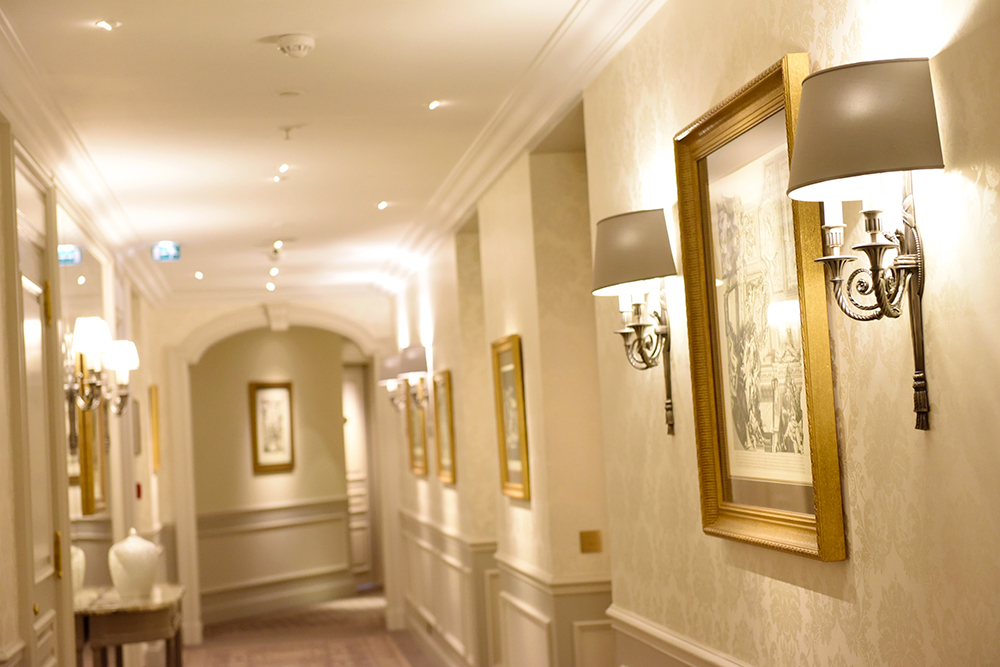 Ever since my visit, and I’ve been trying to tell you about my Press Day! I have to put my ideas in place. First of all, thank you ! Because many of you were sending me messages that day to tell me that I had a very difficult job. Ah ah! If you would have liked to be there, then I’m more than happy to share it with you.

Today, 23 journalists were selected as part of a delegation to promote the Vosgian savoir-faire in Paris. On the road since 6 am, everyone was ready and on time!!! By the time I was having breakfast, they had already left the house, taken their car to Nancy, enjoyed the one and a half hour TGV ride to Paris, and had a bite the cool Parisian way at 8:30 am in the metro !

First Lesson : Nothing Stops the Vosgien.

Some small coffee time to discover the beautiful red benches made by Jean-Pierre Besse. A true Vosgian. Now, did you get an idea about the theme of the day? The rest is all 100% “Je vois la vie en Vosges“, the new slogan trending on social media ! 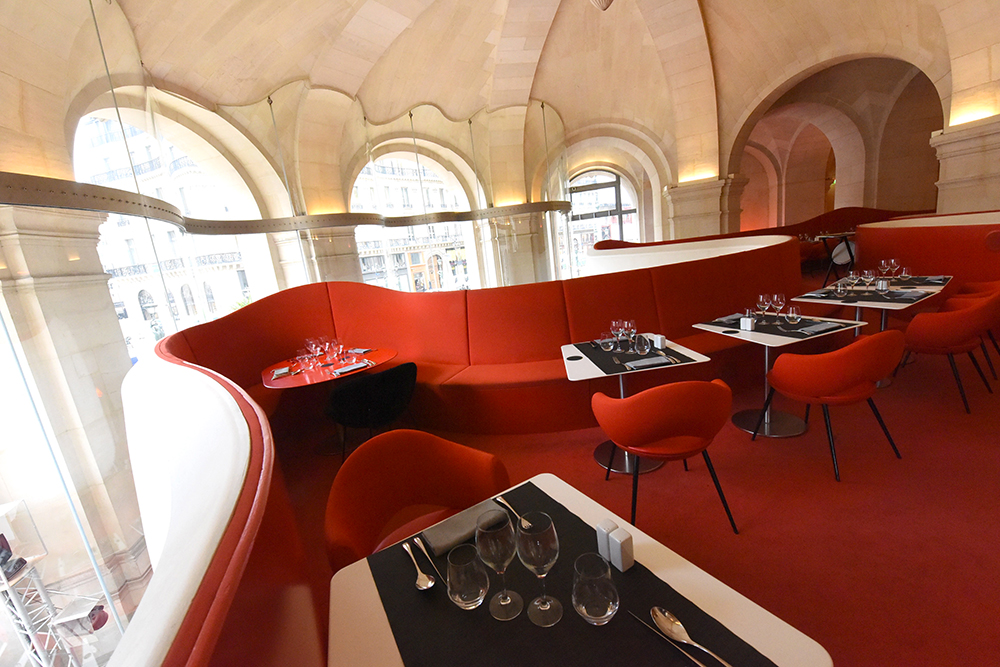 That was easy, we’re already there! The place is magical, we were told that the chairs were manufactured by Henryot & Cie, an exceptional furniture maker who has mastered the French savoir-faire since 1867! They are also in charge of refurbishing them. It’s amazing when you think about all these seats being made by craftsmen, loaded in a truck and transported all the way to Paris ! 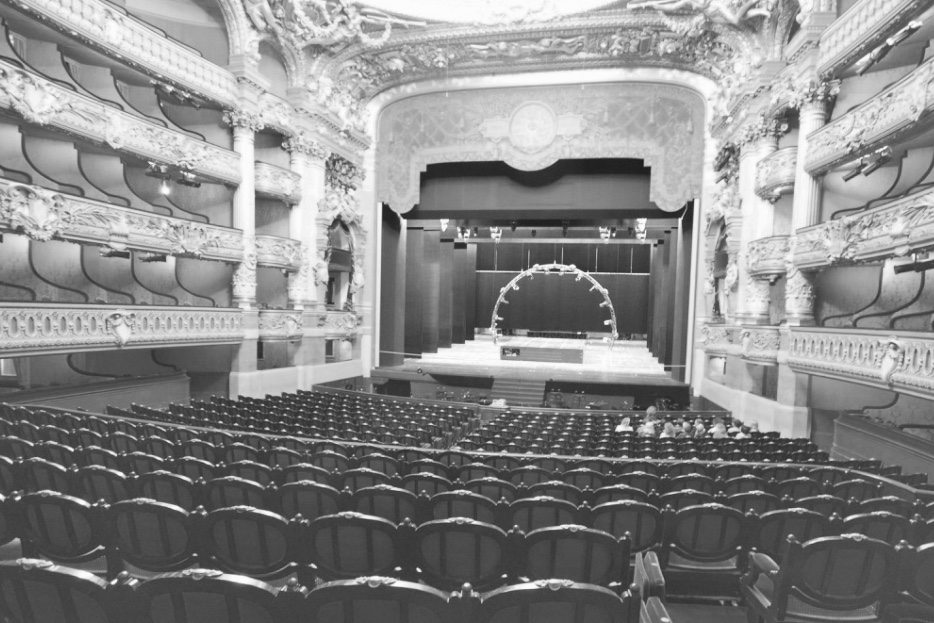 11h30: After few minutes of walking, we arrive at the Mandarin Oriental !

I admit it’s one of my favorite Parisian palaces at the moment. Located on Faubourg Saint-Honoré street – modern – incredible floral decoration – luxurious rooms and suites – a pool and spa to die for … Okey I’ll stop now, the list can go on. This is where we’re going to have breakfast. You probably didn’t know, but the manager of the Palace is from Vosges. Now isn’t that crazy ?!

To be honest… The real “news”is that the  Mandarin Oriental’s chef is none other that Thierry Marx !!! 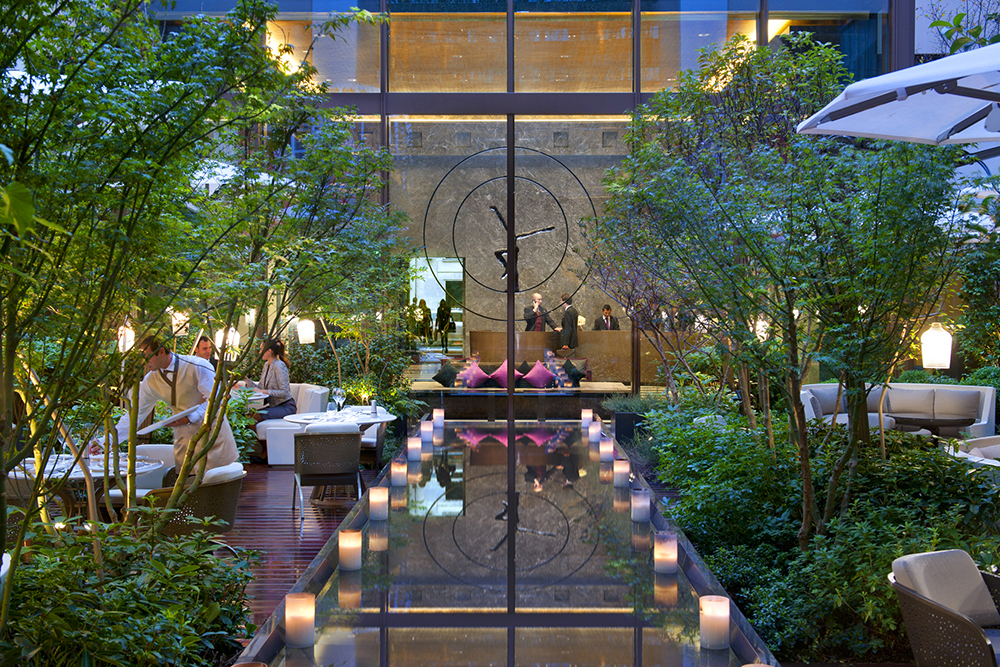 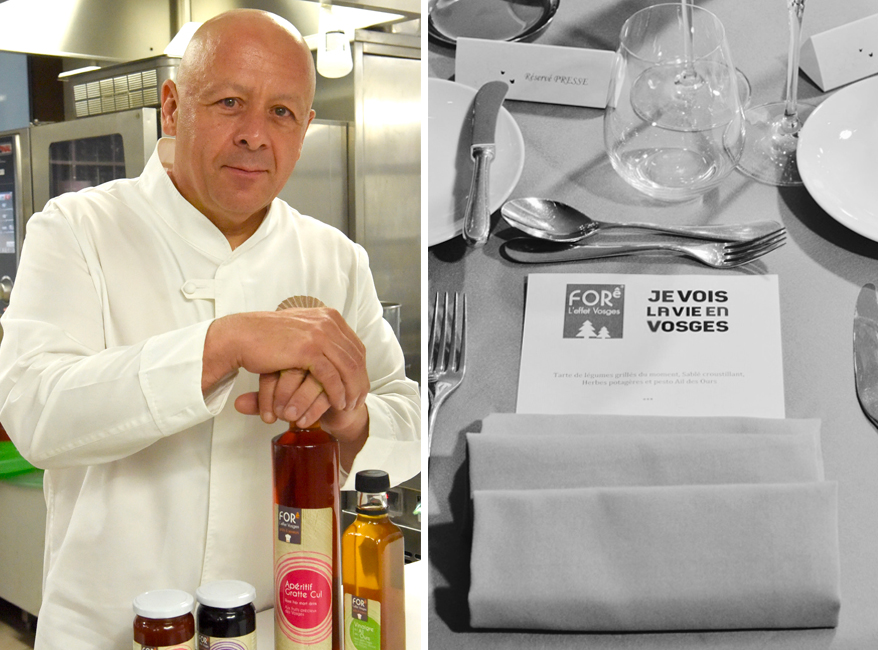 Tadaaaa !!! Today, he accepted a challenge: cooking with Forê products. Cider, birch water, jams, oils, etc. The brand was created by the Conseil Départemental des Vosges to promote local products from the natural resources of the forest and local productions. A true delight !

The chef has created 3 dishes for the occasion. I was so excited to be tasting his cooking !

While I babble about “savoir-faire and tradition” with my friends at the table, a complete silence takes over the room. It was Thierry Marx in person who walked through the door ! 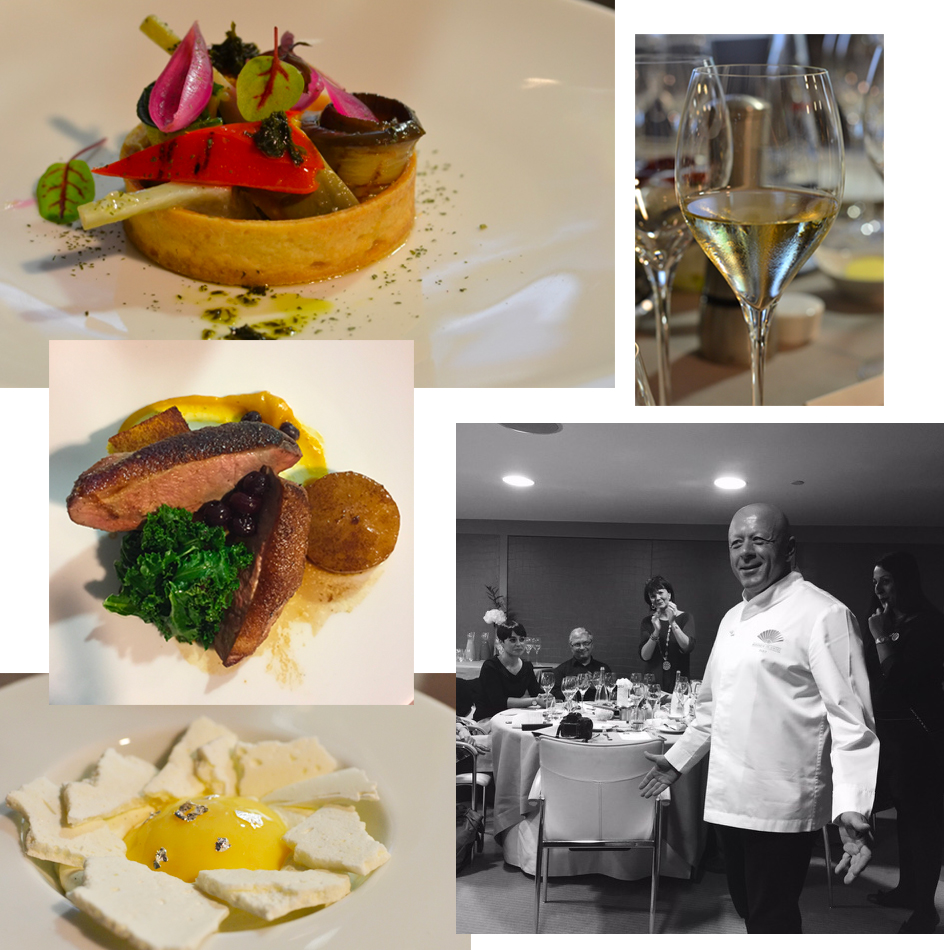 I admit I’m totally charmed. He has a very special aura! Friendly and very open to the people around him, he reminds us of his commitment to promote French savoir-faire. I believe he’s an exceptional ambassador for this matter! His menu is excellent. I even ate vegetables that I don’t usually enjoy !

The visit of Thierry Marx left us on cloud nine. But now it’s time for some small conferences to get to know the managers with us. The atmosphere is very friendly and the day is beautiful especially because we share something in common: their passion. 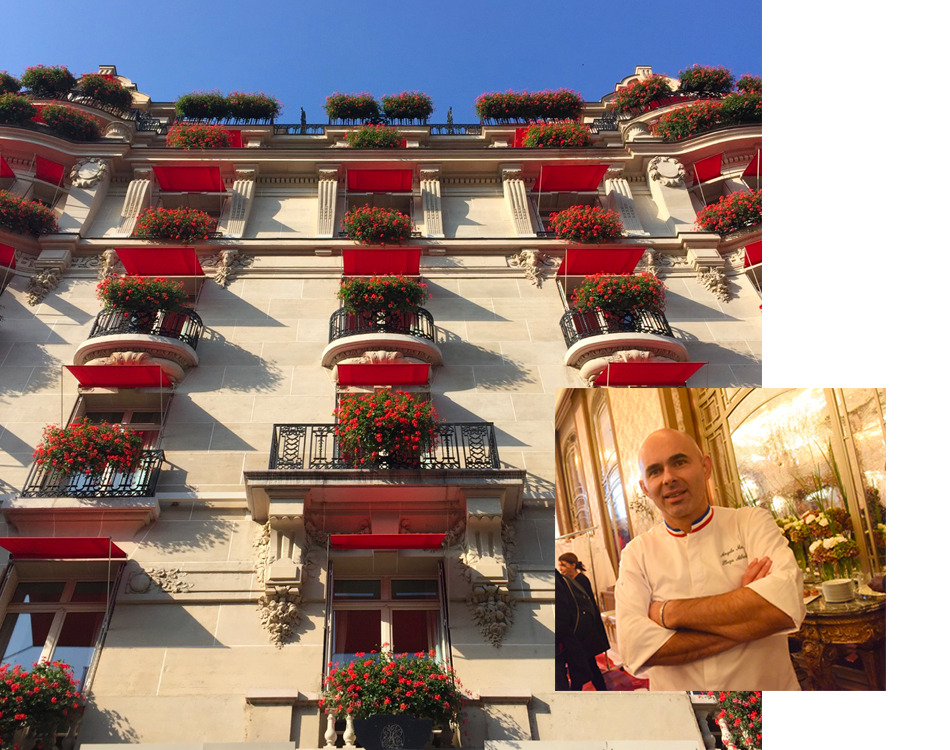 The welcoming was outstanding! We met Angelo Musa, the best pastry chef in the world and the best craftsman in France!

Then, we were headed to the suites to admire the furniture made in the Vosges by the Laval family, who passed on an admirable savoir-faire from generation to generation since 1892. The company is now on an international scale in the Luxury market ! 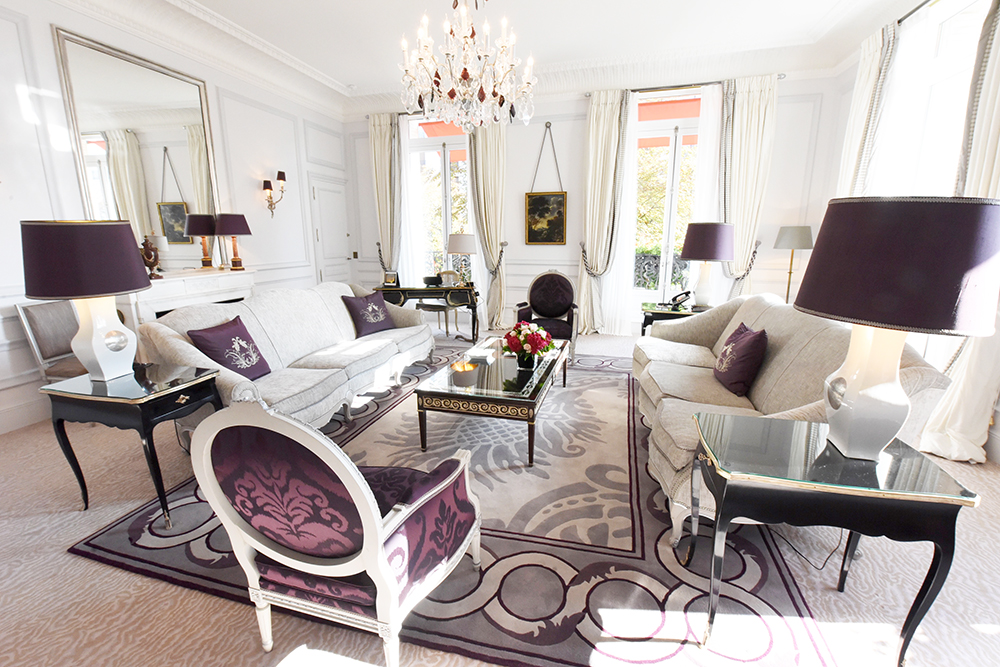 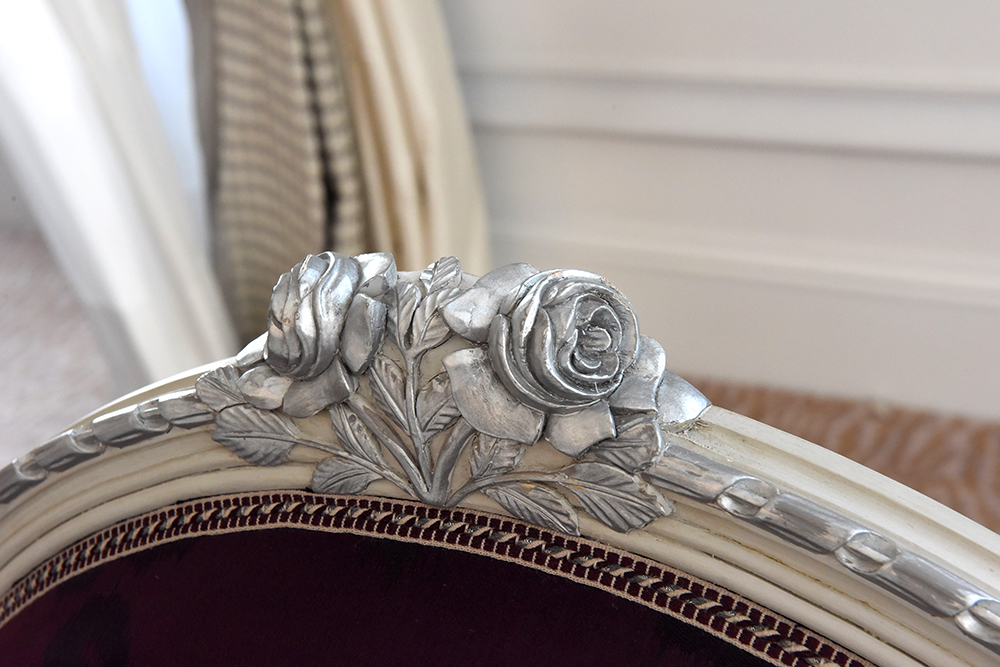 16h00: One stop at the Four Seasons George V

Yes, I said “a stop” because at this point in the day, nothing will surprise us! It’s crazy how we overlook this kind of things. Ah ah ! The floral decoration in the lobby and the lounges are extravagant. We spent 15 minutes taking pictures from every angle. Then to the dining room to discover tables made by Counot Blandin, a company known for replicating the exact work of great Masters, or exceptional creations. 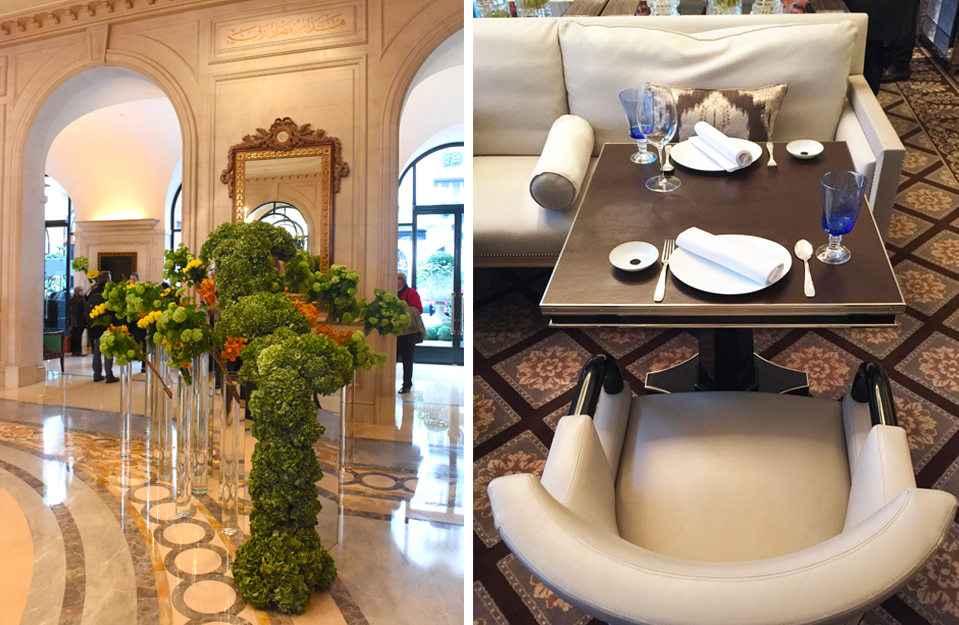 Welcome to the hotel lobby of Le Fouquet’s ! Impressing, these benches look as if they were straight out of a Fairy Tale. Made by the manufacturer Jean-Pierre Besse.

Doesn’t it give a little “Alice in Wonderland” vibe? And now, I’ll leave you to it. As we all know, Fairy Tales have an ending ! 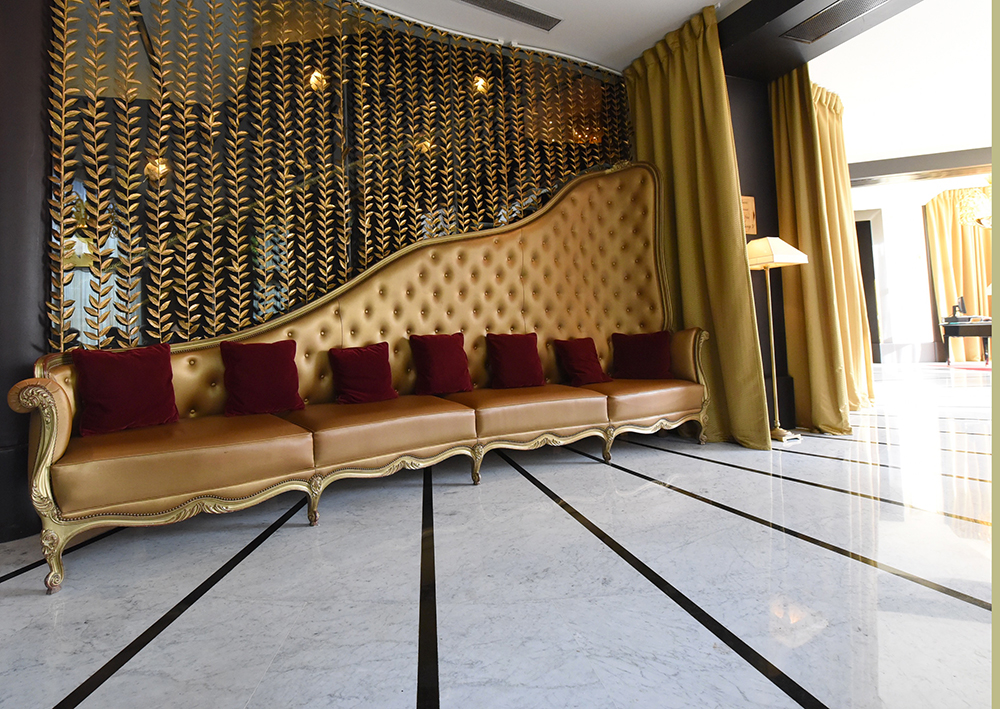 NEXTMatthieu Coquelin : The Ace of the Made in France Swimsuit ! 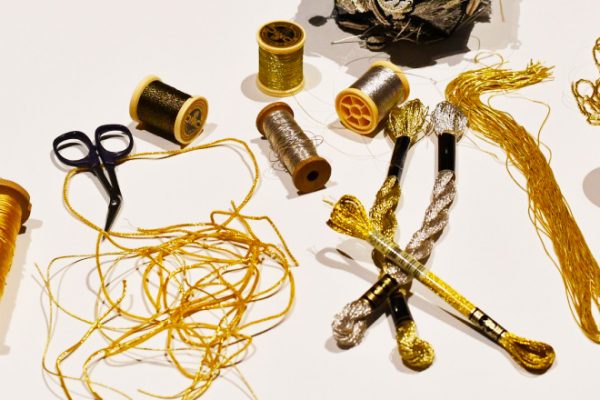 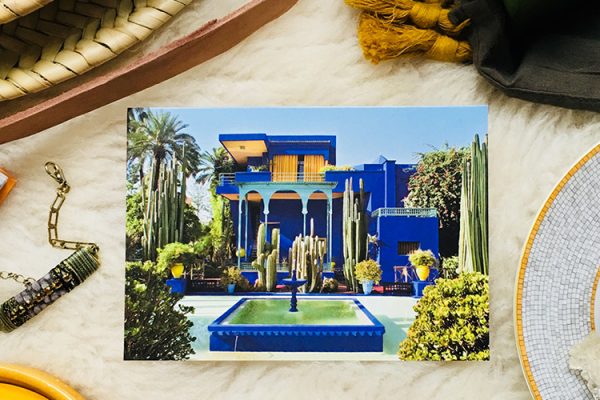 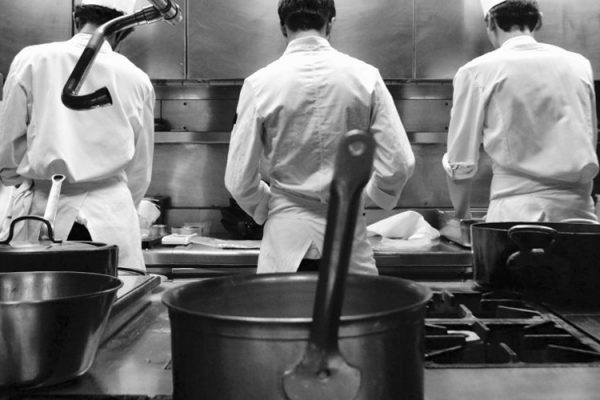 Inside the kitchen of a starred chef!